JULIANNE HOUGH: I Still Get “Giddy” When I See RYAN SEACREST On TV

JULIANNE HOUGH admitted to celebrity news that she still gets “giddy” when she sees her boyfriend RYAN SEACREST on TV. 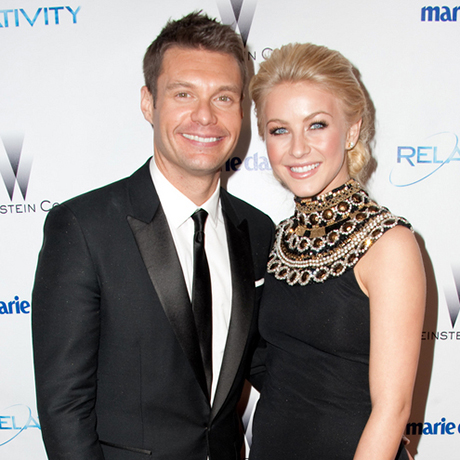 Julianne Hough once revealed that Ryan Seacrest was her “first celebrity crush,” But now that she’s dating him–and for almost three years now–she admits she still gets butterflies in her tummy whenever she sees him on TV.

So when she saw the irreplaceable “American Idol” host on the Grammys preview, she just couldn’t help herself!

During the New York premiere of her new movie, “Safe Haven,” Hough gushed to reporters:

“I flew in from Nashville — I was at my sister’s baby shower — and I walked in right as he was on and he looked so hot. He looked so cute!”

“I got all giddy because it was super exciting to see my man on TV. I was so proud of him.”

Well, she should! He’s pretty much the most famous host in Hollywood right now!

Will these lovebirds ever get engaged?